Dr. Mark Spiller Honoured for his Leadership, Commitment to Community 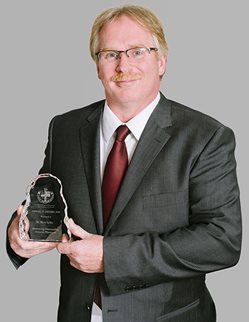 On Friday, September 20th, the College of Physicians and Surgeons of Ontario (CPSO) presented its Council Award to Dr. Mark Spiller. Dr. Spiller is the Chief of Staff at the Kirkland Lake and District Hospital, where he also serves as the Chief of Family Practice and Emergency Medicine.

“Dr. Spiller’s urge to help began almost immediately upon his arrival in Kirkland Lake, ,” said Council member Dr. Michael Franklyn, who presented the award. “The first thing he noticed was that there was no emergency room coverage during the afternoons. So he showed up every afternoon to staff it himself. Since then he has made it his mission to co-ordinate not only the Kirkland Lake hospital’s emergency room coverage but also at the Englehart Hospital (30 minutes away) – working with local physicians to re-arrange schedules and often picking up shifts himself to ensure both hospitals can keep their doors open.”

Dr. Spiller’s mentorship style and collaborative relationships with colleagues have earned him the respect of the medical community. So much so, that he was appointed the first chief of staff for the amalgamated Kirkland Lake and Englehart hospital.

Dr. Spiller has devoted 29 years of medical practice to his Kirkland Lake community, where he is said to have had a profound effect, transforming the medical institutions and local patient care. In addition to many years of service as chief of staff, he has been a coroner and the telehealth medical director.  He is an assistant professor at the Northern Ontario School of Medicine and, in addition to working in the Kirkland Lake hospital’s emergency room, he does emergency room shifts at the nearby Englehart and District Hospital, and attends to patients at a clinic 60 miles away that helps serve the Matachewan First Nations Reserve.

The Council Award is presented at each meeting of Council to honour outstanding Ontario physicians who have demonstrated excellence.

The College of Physicians and Surgeons of Ontario is the licensing and regulatory body governing the practice of medicine in Ontario. The Council Award is presented four times a year to physicians who have demonstrated excellence in the eight physician roles identified as the essential qualities needed to practise modern medicine. Together, these roles create a model for the ideal physician. Further details can be found on the Council Awards page.