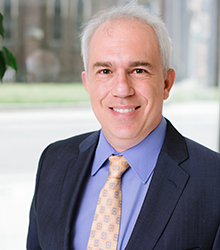 David A. Wright has been Chair of the Ontario Physicians and Surgeons Discipline Tribunal and its predecessor since 2020. Previously, as the founding Chair of the Law Society Tribunal, he spearheaded the reform of adjudicative processes at the Law Society of Ontario. He also served as adjudicator at the Human Rights Tribunal of Ontario, with roles including Vice-chair, Interim Chair, and Associate Chair. He completed his B.A. in History at the University of Windsor and his LL.B. and B.C.L. at the Faculty of Law of McGill University. David articled as a clerk to Madame Justice Claire L’Heureux-Dubé of the Supreme Court of Canada and then completed his LL.M. at New York University. Prior to becoming an adjudicator, he practised labour and employment law. He speaks frequently at conferences, has taught at Osgoode Hall Law School as an adjunct professor, and is the author of several law journal articles. David is Chair of the Council of Canadian Administrative Tribunals.