Explore the history of the CPSO and medical regulation in Ontario

Explore the history of the CPSO and medical regulation in Ontario

Since its founding in 1866, the CPSO has been ensuring that Ontario has some of the most highly qualified medical professionals in the world. Though its functions and responsibilities have evolved over more than 150 years, the CPSO continues to fulfill this important role today.

Our archives hold a remarkable trove of stories, documents and photos from the CPSO’s past. Please click through the eras below to learn our story and the history of medicine in Ontario from its early beginnings to today!

When Upper Canada was founded in 1791, doctors in the colony were scarce. The population was small and scattered, and the few doctors living here were employed by the military. Consequently, several early attempts to regulate medicine failed because it simply wasn’t practical to do so. Then, in 1818, the Medical Board of Upper Canada was established. It periodically met to license individuals having “loyalty, integrity and good morals,” but it had no powers to seek out the many unqualified individuals claiming medical knowledge who began to flood the colony after the American Revolution. As Canada grew, it became clear that something more had to be done to protect the public and raise the standards of the profession. 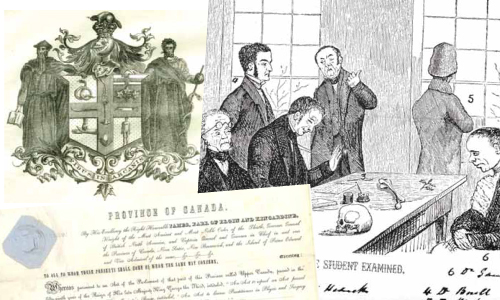 The practice of medicine in the early 1800s

Most trained doctors in Upper Canada during the early 1800s worked as general practitioners and lived in urban areas like Toronto and Kingston, providing services as physicians, surgeons and apothecaries all at once. In rural areas, neighbours and friends often worked as midwives and bone setters, and clerks in stores that sold drugs would diagnose individuals on the spot and then sell them medications.

By the 1840s, people had three main types of doctors to choose from: the “regulars” (meaning standard licensed doctors), the eclectics, and the homeopaths. All three had basic medical knowledge, but practised medicine in different ways. The regulars were fond of violent methods of treatment, as they believed one should meet severe symptoms with equally severe treatment. Bleeding and purging sometimes worked, but they also sometimes killed patients. The eclectics rejected these principles and used gentler methods, such as local roots and herbs, for treatment. Many of their practices were learned from the well-developed medical knowledge of Indigenous peoples. Finally, the homeopaths advocated the treatment of individuals with either small doses of desirable drugs, or with drugs that would cause the same symptoms in a healthy person as experienced by the sick person. All three groups initially had their own licensing boards, but in 1869 they were united under the banner of the College of Physicians and Surgeons of Ontario. 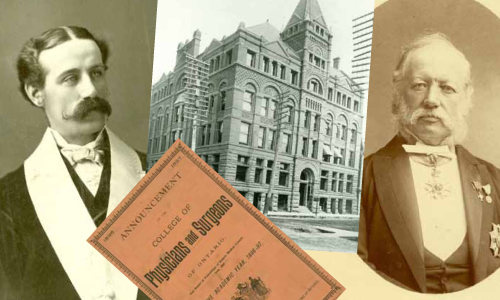 The first 50 years of the College witnessed great changes in Canadian society and medicine. From 1861 to 1911, the population of Ontario grew from 1.4 million to 2.5 million people. Larger numbers of doctors migrated to the province, and medical schools began to graduate new doctors. By 1871, there were 1,177 doctors licensed by the College, a number that would triple to 3,807 by 1907. Medical care moved from the home to the hospital, and the profession began to pursue in earnest the idea of medicine as a science. With all this change in the air, the General Council of Medical Education and Registration first met on May 2, 1866.

The Council was renamed the College of Physicians and Surgeons of Ontario in 1869 with new legislation that brought the regular, eclectic and homeopathic systems of medicine together under one body. The move was scandalous within the regular profession, but the public greeted the union favourably, and the groups resolved to work together. Throughout the rest of the century, the profession debated how to best govern itself, what role the College would take in shaping the medical profession, and, most importantly, how it would ensure the safety of the public through setting standards. This period of great debate ultimately forged the key functions of the CPSO: licensing qualified professionals and setting standards through education and disciplinary functions, including seeking out unlicensed practitioners and handling complaints.

“It is highly desirable to protect the public by allowing only thoroughly educated men to receive a licence to practise Medicine … we are prepared to use our best efforts to make it acceptable to the Profession and beneficial to the community at large, by raising the standard of Medical education throughout the country” – William Henry Brouse (President, 1870) at 1869 Council meeting. 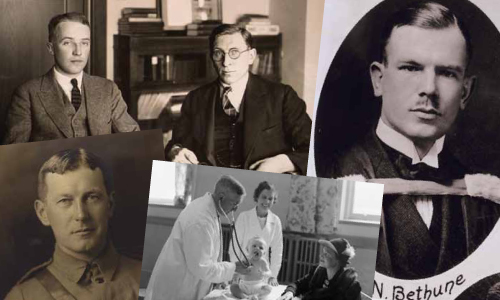 World War I would have an enormous impact on the study of medicine. The immense damage inflicted on soldiers’ bodies from modern warfare prompted doctors and nurses at the front to develop new types of treatment to reduce suffering and save lives. In 1915, the CPSO rushed to license new medical graduates who volunteered for service. Among the Ontario physicians who gave their lives was Lieutenant Colonel John McCrae, known the world over for his poem “In Flanders Fields.”

The study and practice of medicine was changing in other ways, too, as a push towards public health reform motivated doctors to seek new avenues for care and treatment beyond surgery and pharmaceuticals to vaccines and preventative health. At the same time, new practitioners such as osteopaths and chiropractors, which together with other disciplines were called the “drugless practitioners,” challenged the medical status quo and demanded freedom to practise, not unlike the eclectics and homeopaths had in the previous century.

The College rid itself of the job of examining students following the formation of the Medical Council of Canada in 1912, which took over the responsibility. Students could still optionally take exams until 1933, but as medical education became standardized, the focus changed towards maintaining standards for practice after a student completed the degree. The primary means the College could achieve this was through its disciplinary function, which developed further during this period. 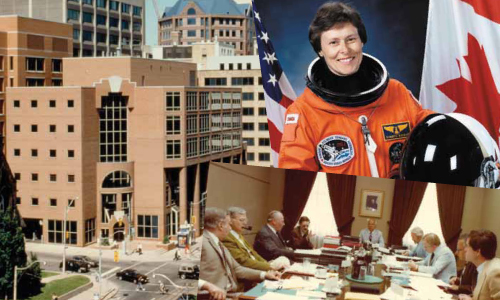 The CPSO’s modern era witnessed an incredible amount of change as its philosophy and practices evolved to meet the needs of the public. Medical science developed increasingly specialized areas, and medical care became available to all Ontarians through the introduction of universal health care.

A large number of international doctors began arriving in Ontario after World War II. Helping these practitioners join the province’s medical profession while ensuring the quality of their education became a priority for the CPSO over this period. The work to refine the methods for registering these physicians resulted in a strong program for the licensing of international medical graduates that continues today.

Other CPSO responsibilities did not change until the passing of the Health Disciplines Act in 1974. The Act enabled appeals for decisions made by the Complaints and Registration committees. The result was a change in philosophy that emphasized regular physician assessments, continuing education and remediation to reduce complaints. The Act was passed at a time when the public was seeking greater openness of its public institutions. In this atmosphere, the CPSO appointed Betty Kennedy as its first public member to the Complaints Committee in 1970. Further changes included stronger, publicly minded policy development, and ongoing initiatives to prevent and deal with the sexual abuse of patients by physicians, moves which were emphasized when the Regulated Health Professions Act came into force in 1994. Our ongoing transparency initiative to make more information available to the public continues to support the concept of a more participatory, accountable College.

Today, the College of Physicians and Surgeons of Ontario is a thriving organization that plays a key role in Ontario’s health system.